As long as there is nothing better, we organise the travelling people by ZIP-code. In Germany the first 2 numbers are easy to use and work well, dividing the country into some 100 regions.

If your salespeople are more local, the zip-code is of no use anymore. People who know their region well, organise their routes without really thinking about. Does someone in the office the appointments, I better rely on technical help. This is a tour crossing Augsburg, Bavaria.

Here a different region. Obviously not the best route, when sortet by zip and alphabet, This is the same selection optimised for shortest distances: And this shows the same travel on real roads: 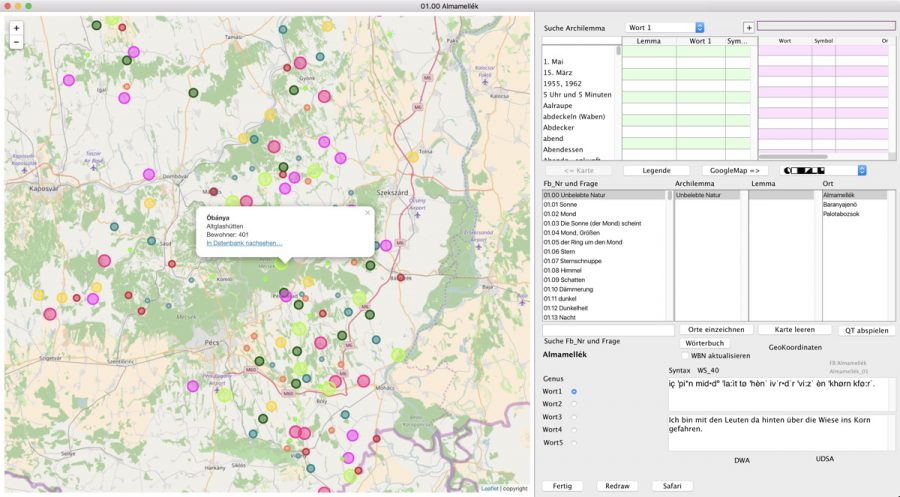 My map is different

Some 4D-applications are very specific. A linguistic-professor asked, to show the german dialects of southern Hungaria (schwäbische Türkei) on a map und being able to dig deeper from the map. His map is different.

He solved the problem with MaPagenda, plugged into his 4D-app with some help from us. The accompanying sound-documents will be played, when a marker on the map is clicked. Like “let me hear Wenker-sentence 23″.

Any time soon, public mills grind slowly, this database will be published on the net. Today it’s just a button-click away to open the map in a browser.

This is a follow-up to Where is this IP from? There I explained how to find where a IP came from. Now the question is, where did the IPs of today come from. The answer is a couple lines of code Draw more than one IP onto a map

The map is just another kind of display for data:

locations of many IPs drawn on the map

This map shows to much information. I need to dissect, subselect, analyse and understand what I’m seeing here. The very first enhancements will lead to a map like this: I was parsing log-files from a webserver. Main interest are which IPs surfed to the site and where did they come from. I used the service of FreeGeoIP for the information.

Row 15 shows the request to FreeGeoIP. I want the result as JSON-object, why I send an object for the response. Did the request succeed (status = 200), I do read the coordinates from the Response_O and use MaPagenda-keywords to fill the mapObject. Finally the mapObject is converted into a JSON-string and delivered to the subform-variable. this is the code

And this is how the results look like: the response_O and the map.